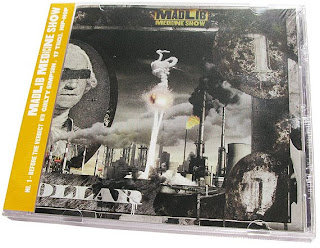 Welcome back to The Mix Lab, Happy New Year! Here some news to start off 2010...I know its been around the web for about a month or so. DJ/Producer/MC Madlib and Stones Throw Records will be releasing a once-a-month mixtape that totals to 12 CDs starting this month (January). This special mixtape series is titled "Madlib's Medicine Show".

Stones Throw Records are selling a limited amount of the first issue online as a pre-release advanced CD. Plus, you may also buy LP or CD over at UndergroundHipHop.

Speaking of Madlib, here at The Mix Lab we will be droppin' a special podcast & mixtape this month featuring exclusively Madlib influenced tracks (produced, emceeing, features). If y'all enjoyed the J Dilla - Beats, Rhymes & Donuts, this will also be a dope addition to the iPod or stereo!

Also expect another new episode and a couple other special mixtapes thats ready to launch!